I was recently charged with picking out a new telephone system for a new office the company I work for was moving into. We were previously using a 3Com NBX 100. Inbound and outbound call volume for this company is relatively low. The needs of the company included:

The company was not looking for a unified messaging system, video conferencing, color LCD phones with automatic VPN connections, etc. A basic PBX to support the phone needs of a small company was all that was needed.

Proposals from a couple providers yielded total costs of a 10 hard phone + 10 soft phone system to be around $8,000 – $12,000 with an ongoing contract. This seemed a bit high considering the simplicity of the needs of the company. After some research and a lot of trial and error I was able to get the entire phone system deployed for less than $2,100 ($350 POE switch, 10 phones * $85, ~$900 analog card, used an old Windows box lying around). It took me about a week of full-time work to figure out how all the peices fit together and deploy the system. Although VOIP may seem a bit intimidating with all the lingo and plethora of options, it isn’t as hard or mysterious as it may seem at first.

Hopefully this compilation of notes will help someone in a similar situation develop and deploy a VOIP Asterisk based solution. Enjoy.

Setting Up an Asterisk-Based VOIP System with Polycom Phones

There a couple ways to handle Asterisk installation, and a couple GUIs to choose from. I settled on AsteriskNOW + FreePBX GUI. After downloading the image, burning it to disk, and booting from the disk on your asterisk box you still need to update to the latest versions of the software by running `yum update`. After running `yum update` you’ll have to update the FreePBX software. You can sort of do this through the FreePBX module interface, but there was an extra step involved that I couldn’t find my notes on.

This message was caused because of an old Microsoft 2003 Business server that was still connected to the network. DHCP used to be handled by the server, but we switched DHCP to the SonicWall. Although DHCP was disabled on the MS server, it seemed to be sending out some sort of broadcast that caused the phones (and only the phones!) to report a duplicate IP. Eliminating the MS server was the only solution that worked (all services relating to DHCP had been turned off on the server.

The Polycom devices support both FTP + TFTP configuration + boot loading. However, I was trying to simply the setup as much as possible and trivial FTP sounded a bit more simple. However, a TFTP server is not configured by default on an AsteriskNOW installation. To enable TFTP, first run `nano /etc/xinetd.d/tftp` from the command line and then change `disable = yes` to `disable = no`; save the file. Finally, run `service xinetd restart` from the command line. The TFTP server should be up and running.

The TFTP server does not have `ls` and other FTP-like commands. The easiest way to test if it is working is to grab a file from it from another machine:
[codee]
$ tftp pbx.localhost
tftp> get LoudRing.wav
Received 128810 bytes in 0.1 seconds
tftp>
[/codee]

Apparently there are many parameters you can send to clients via DHCP. DHCP was running on a SonicWall 210 in this specific configuration. I had a bit of trouble getting this working, but the following settings worked on the SonicWall for me:

Note that the “tftp://” is important. In this specific instance I had a local DNS server running on a Mac Mini Server (Lion) that all clients were configured to hit before hitting the external DNS.

In order to install End Point Manager I had to upload the module via the FreePBX Module Admin. For my installation (details given above) I used version 2.9.2.9 (list of .tar.gz versions can be found here, GitHub repo here. After installing, go to advanced options and set “Time Server” to “pool.ntp.org” and nmap to “/usr/bin/nmap” (you may have to install nmap via yum, I can’t remember if it was installed by default or not). If you are using TFTP, make sure that configuration option is set as well. I could not get the automatic phone vendor packages to work. I had to download the “provisioner_net.tgz” and manually upload the package via the “Manual Endpoint Modules Upload/Export” under “End Point Advanced Settings.”

At this point, with the DHCP options correctly set, for new phones you should be able to plug them into the network, run a scan using nmap, and add the phones via the end point manager GUI. Unplug & replug the Polycom phone in and it should pull the configuration from the TFTP server (the PBX box) set in the DHCP options and startup just fine.

Yum is the default package manager on CentOS, but the default repos don’t contain git. I wanted to pull in my dotfiles to the Asterisk box as well as manage the custom print extensions repo that I was working on. Here are the two BASH lines you need:
[code]
rpm -Uvh http://repo.webtatic.com/yum/centos/5/latest.rpm
yum install –enablerepo=webtatic git-all
[/code]

This is specific to Digium based cards. I didn’t know this until after purchasing the TDM800 with hardware echo cancellation, but after talking with an Digium customer support representative I learned that the algorithm used for echo cancelation is the same for the software based and hardware based echo cancellation. The CPU load on my installation hovers around 1%, I’m guessing for a < 20 person office environment the software based echo cancelation would of worked just fine (although I don’t have experiential evidence to support this).

Initially call logging did not work in my installation. You can check if call logging is configured correctly by running `asterisk -r` and then running `cdr show status` from the Asterisk prompt. You should see something like:
[code]
Call Detail Record (CDR) settings
———————————-
Logging: Enabled
Mode: Simple
Log unanswered calls: No

* Registered Backends
——————-
mysql
cdr-custom
[/code]
If your installation is working correctly. Mine wasn’t, working off this guide, the following BASH commands worked for me:
[code]
# check if the mysql addons are installed
yum list installed|ack mysql

I was throughly impressed by the quality of Digium’s customer support. They answered non-hardware related questions, ssh’d into my machine to debug some issues, and there was a less than one minute wait time.

This was something that ended up being a bit more tricky that I thought. I ended up configuring the dial patterns to force long distance formatting (01+xxx+xxx+xxxx) on all numbers. I wanted to ability for people to dial with and without the 1, this seems to be working fine so far: 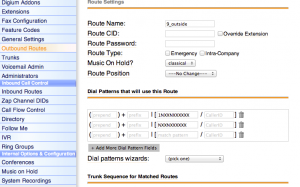 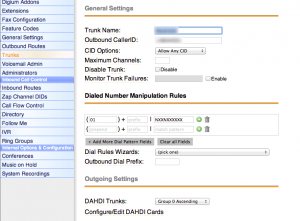 Different POTS lines have different levels and other ‘analog stuff’. To clear out noise and optimize your configuration you need to run the following script (retrieved from a Digium rep):
[codee]
service asterisk stop
# tunes impendence on the analog lines
fxotune -x -i

Configure your IVR, then go to Setup –> Inbound Routes. Choose “any DID / any CID”. At the bottom of the page switch “Destination” to IVR + desired auto attendant.

I usually login to the Asterisk box as root. I configured the backups with my root SSH key, but the Asterisk backup process runs on the Asterisk user. Make sure that the SSH keys you hand off to FreePBX are readable by the asterisk process.

Word of warning: I haven’t actually done this yet. These are the notes I’ve compiled, but I wasn’t able to get all this information together before the phone system was deployed.

Most of the guides I was able to find were a bit out of date. When reading through those resources recall that Dahdi is the new Zaptel. There are two gain adjustments: inbound (rxgain) and outbound (txgain). In order to test the levels run the following command: dahdi_monitor 1 -vv. These levels can be calibrated against a 102 milliwat test number, I found one here: 670-234-0102.

For the TDM800, here are the instructions from Digium on how to edit the two gain levels:

The gains are typically edited in /etc/modprobe.d/dahdi.conf. The parameters are set like:

The default value is -4.5db (decibels)

They can also be edited in /etc/asterisk/chan_dahdi.conf

In this case the ‘db’ is assumed by asterisk. In chan_dahdi.conf the default value is 0.0.

We encourage you to make small changes to any of these values as it can dramatically effect your audio.

Here is a list of links I found helpful while researching this stuff.